By Alastair Hibbins - May 15, 2016
Nice to go to an under used part of our patch, and it was a stunning morning for the hash.  Many seemed to have arrived early - presumably because we weren't all sure of where we were going!  But the usuals arrived late... Woodpecker, Fancy Licker, and Coffin and co.  In fact, Coffin and Emelda didn't pitch up until twenty past - by which point the rest of us had left the car park.  Prior to that, Spocky had welcomed the pack, and introduced the hares (twice due to latecomers).  We learnt that the hares had to lay the trail the morning, after deciding that the route they tried to lay yesterday was far too long.

The trail started off down hill and we soon hit the first long-short, and Strapo told us all to take the long.  This turned into quite a long loop further down into woods, and then a long slog back up to where we had just been.  The fish-hook on the way back up was particularly appreciated.  Then another long that veered off left, and headed steeply downhill into some bluebell filled woods.  Little did we know that we were going to enjoy them twice, because there was a Ha-Ha at the bottom!  Back up we traipsed (see photo below) and then headed back within a few strides of the car park.  But not quite - we were back into the woods and then running parallel to the road.  There was apparently lots of confusion when we crossed the road - but not by us front runners.  The marks suggested straight across the track, when it was actually right, and then over the road.  While we quickly then arrived at the sweetie stop (with a view), those behind us were 5 minutes or so behind.  Strapo told us the sweetie stop was 3/4 of the way around the trail, but he lied - we were within 3 minutes of the on-home!
Without our sheriff, we just went round the circle to fine each other, with the latecomers getting the fines.  Then Tampa told us the sad news about Ben who'd passed away yesterday.
Another great trail - don't forget to rate it - and the best hare will be announced at the Christmas Party.  Next week we're at Tampa's house in Clyst St Mary for his annual BBQ (map is here). 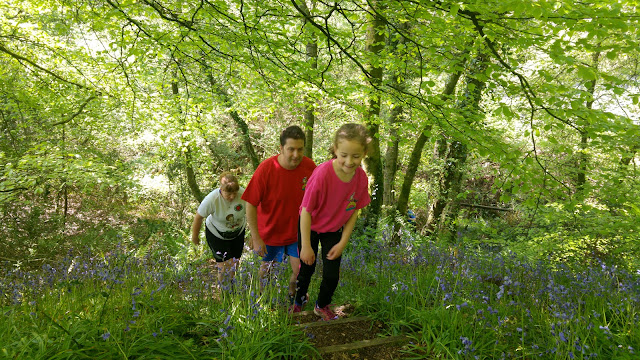 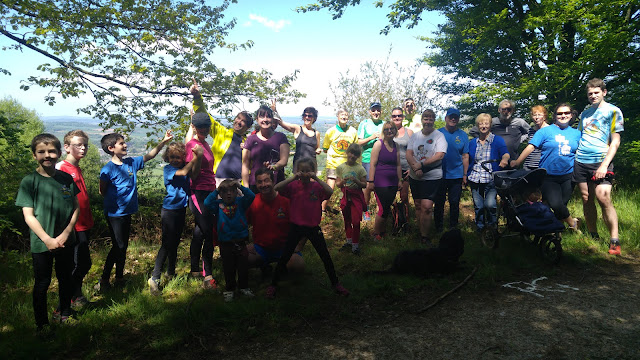