By Alastair Hibbins - October 09, 2016
This week's trail was a bit different.  Blobby had organised a fundraiser in aid of MND at the golf club on Topsham Road.  We had a good size pack of 30+, and Teign Valley Pedal Bashers joined in too for their own trail - apparently into the city and back via the Turk Locks.  We all got a t-shirt for our £5 donation from some really happy MND volunteers (how mad are they to be that cheerful on a Sunday morning!).  Blobby took the virgin hashers over to a dark corner - allegedly to show them his markings, and then after a few ramblings from Spocky - we were off.

Straight down on to Topsham Road, and then along to Countess Weir, over the footbridge and into King George's playing fields.  The same always happens in there - a nice hard long around the edge, while the shorts head direct across.  Then down to the river, and towards the mill - where we were just a few week's ago on Damp Patches' hash.
There were soooo many fishhooks on today's trail - particularly good because of all our visitors - and Blobby kept the pack together really well.  He even managed to get a river stream crossing into the trail - and Spocky did particularly well at encouraging everyone to get a little moist between their toes (who hates that word??).
Soon we were at the sweetie stop, tantalisingly close to the Double Locks. Apparently we didn't go in for a pint because Blobby didn't want to give the wrong impression to our virgins!  It was soon pointed out that this would have been the CORRECT impression!
By this point we'd done around 4 miles, and were beginning too tire - especially on a trail that was supposed to be 5 miles long.  But were definitely past half way, with a long stretch along the meadows towards Bridge Road, and a loop around Countess Weir (including Twin Peaks pointing out some rather lovely grey bras on a washing line).
I had filmed most of the trail, and broadcast it to the world via facebook.  It was great to see Strapo and Swampy watching it (from their holiday in Cape Verde), also Tight Lips, No Butt, Footloose and Fat B**stard.  SOmetime soon I'll edit it and upload it to the blog, but for now you can watch it on our facebook page https://www.facebook.com/groups/cityofexeterh3/
Those who'd elected to stay for the BBQ and beer were a little surprised that.... there wasn't one.  Instead we had to order from the bar (and we weren't allowed to buy ale!), and eventually got told off by a really embarrassed waitress because our children were "playing".  Never mind!  But over £300 raised and a great trail!
Next week's trail is due to be at Newton St Cyres Golf Club.  Those in the know will realise that its the same day and time as the Great West Run.  Why didn't the organisers check with us??!  Details about how to best get to Newton St Cyres will follow - or we may find an alternative venue - stay tuned!

As always, please don't forget to rate the hash!

Untitled from Alastair Hibbins on Vimeo. 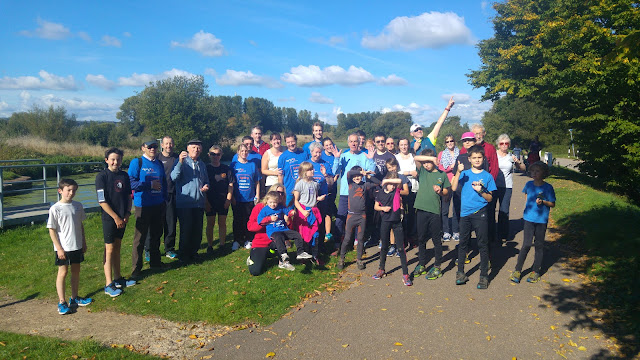