By Alastair Hibbins - November 15, 2016
The pack gathered in the pub car park with everyone being there rather early compared to general standards. Woodpecker arriving at 10.45 hrs (never been known before.)

General chatter was the theme until Tampa called us to order and suggested that he knew of a place where we could listen to the silence. The location was his car. The pack respectfully observed 2 minutes silence. Then carrying on the military theme Twin Peaks fined all hashers not wearing a poppy.

Next Minxy  explained the trail going into much detail when one  hasher asked how long was the first long, Minxy replying its longer than the short, enough said.
The first long/short came up within  a couple of minutes, the markings today were a shandy of coloured chalk on the urban bits and flour on the rest, both were difficult to find unless one had two eyes open
which several hashers failed to do on account of too much ale inbibed on the previous evening.
Once clear of the urban  bit we all enjoyed lovely views in great weather in and around the dizzy heights of Pinhoe. Once we had passed the church we came to the sweetie  stop, where the pack  went into vulture mode to devour the goodies on offer. Rumour has it that all of the sweet packets were emptied.
It was all down hill now as we meandered on our way back to the pub car park. Thanks must go to Minxy for laying the trail even though she was  suffering from a headache.
Groucho announced that  hash  clothing orders are now being taken and that Bull Bait has the catalogue, he also asked if anyone has cups/ trophies etc from last year could they now hand them in as they will need to be engraved ready to be awarded at our Christmas Do at the Cat and Fiddle on the Sidmouth road on Sunday 18 December.

Finally next weeks hash is at Danes Wood 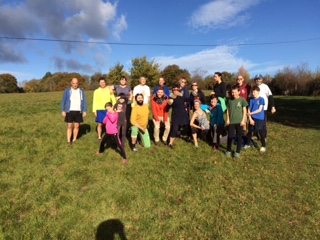