[words by Bollards] Fortunately, hashers had followed the directions from the Hash Blog rather than Facebook and arrived at the right Weston. The two and on trail was hared by Mad Max and Swampy as Strappo had the very important job of manning the BBQ back at Mad Max’s place. The trail went a long way along a lane with a fish hook to slow the front runners down. Unfortunately, I was amongst the first five to get there and had a lengthy trek back up the hill to Mad Max. Stix managed to miss it by sneaking off into a field to water the plants. Eventually we arrived at a long/short split near a caravan park. The longs followed a cliff path; taking in some spectacular views. Sorepoint was held up by a lost normal person, but she still managed to get to the Sweetie Stop before the rest of the pack had devoured them all. A second long/short split saw the longs heading through a meadow before turning onto a lane and finding a ha-ha! Back we came to meet the shorts for another undulating (although not as steep as it could have been) trail along the cliff paths before turning inland back towards the Car Park. Back at the cars, we noticed Woodpecker’s distinctive vehicle. This was a surprise as we’d not seen Woodpecker for the entire trail. We carried on with the circle, then decided to leave a note on his car before heading up to Mad Max’s. Fortunately, as we were driving away, Woodpecker appeared from the wrong direction. Apparently, he was running very late and had started the trail, then turned back. We had a great BBQ. It tried to rain, so we rushed to put up an extra gazebo, only for it to stop almost immediately. Typical! 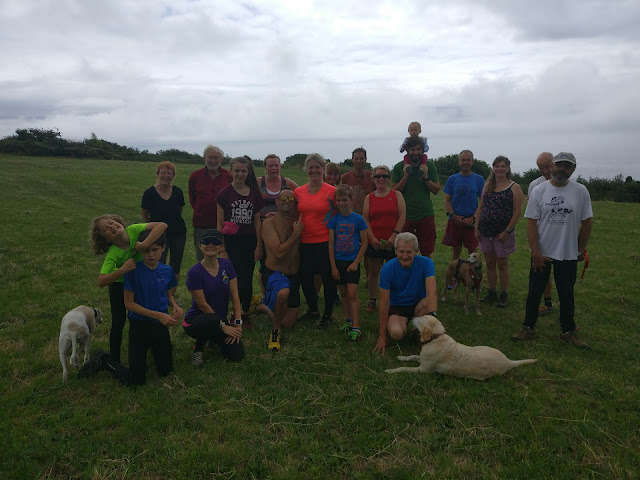