By Alastair Hibbins - October 22, 2017
After yesterday's 'Storm Brian', a hash in the woods was also going to be interesting.  Lots of leaves on the ground to make things slippery and difficult to judge.  But it was a good size pack: great to see the return of Wobbly and Oddbitz, and it was baby Albert's virgin hash!  Later, at the regroup, we reenacted the photo on his day of birth - from 6 weeks ago when he was still in Puss' tummy.

It was one of those 'coat-on/coat-off' days, certainly one of the coldest Sunday hashes this year.  But given some of the hill climbs that were to follow - coat off was definitely the right decision.  After a couple of successful checks, Rocky and I managed to find ourselves front running, along the edge of the woods and away from Exeter.  The the first of the fish hooks allowed the others to catch up.  It was all gently downhill at this point, but then started getting seriously slippery and we headed steeply down towards the road.  Along the bottom path in the woods, expecting the regroup to be in one of the normal spots with a view across the valley, but - no - we continued to a horrible long-short, steeply up, then a sneaky left-hand turn, slipping and sliding down to rejoin the main trail.  Approaching the lower car park - this must be the place for the sweetie stop?

Incorrect again.  We headed almost to the road before taking a left back up through the trees. This was the bottom of the world - we could go no lower! So it was not totally unexpected that a hellish hill was to follow!  I was struggling, and I wasn't the only one. Molly got stuck getting her bum over a fallen tree! When I thought I could go no further, we found the sweetie stop in a small clearing.  Boots had put Miss Chief on the ground (in her back carrier) up against a tree, and she had fallen asleep - and then almost head butted the tree as she stirred. Then a falling stick nearly landed on her!

There were the usual smutty conversations at the SS, including Wide aptly talking about his 2 inch girth.  After the sweeties and photo, the longs went downhill, and back to where we had just come.  We took the track to the lower car park again, and then up the hill once more!  That was more than enough exercise for a Sunday morning, so it was a brisk walk back up around the woods towards the on-home.

By now, the Bitz's had left us, due to X-bitz being unwell.  Get well soon!  We sang happy birthday to Mad Max in the usual hash way, before departing. 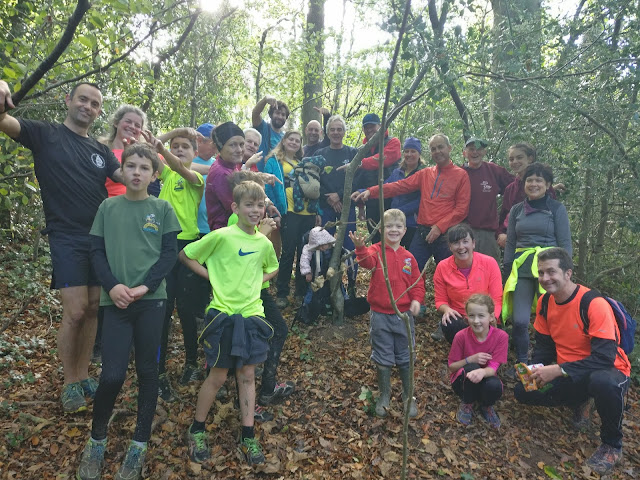