By Alastair Hibbins - October 08, 2017
Words by Bollards
Thorverton Parish Council had kindly allowed us to use the village hall car park so Twin Peaks was there to greet us and wave us through the gates.  The sun was beating down; not the usual October weather -but welcomed.
The trail was three and on, with several long/short splits; the first at the beginning of the trail where the shorts went right, (or was that left?) just out of the car park.  The longs faffed around for a while, crossing over a ford, then back, generally ambling around until they decided to go in the direction of the shorts, then found an interesting diversion down a bank and along a stream until a cross appeared and everyone turned back, slipping on the rocks in the process and makings sure that no-one exited the stream dry.
Back on the road again, the trail took a right turn along a disused road.  Another long/short split took saw the longs gravitating towards, and into, the stream again, when the actual trail went along the edge and up onto an old railway line.  There wasn’t a defined path and we picked our way through the brambles before joining up with the shorts.
The third split was a Ha Ha, of sorts, and shortly after the longs had re-joined the shorts we were at the sweetie stop.  There was much confusion about the name of the small purple flowers growing under the tree, but they were definitely cyclamen.
The last part of the trail had plenty of fish-hooks and then just as we thought we were on home, there were two diversions to make it more interesting (and longer).
The trail was well laid; everyone kept together.  There were the usual fines, plus the naming of Happy Snapper’s husband who will henceforth be known as the Dark Lord. 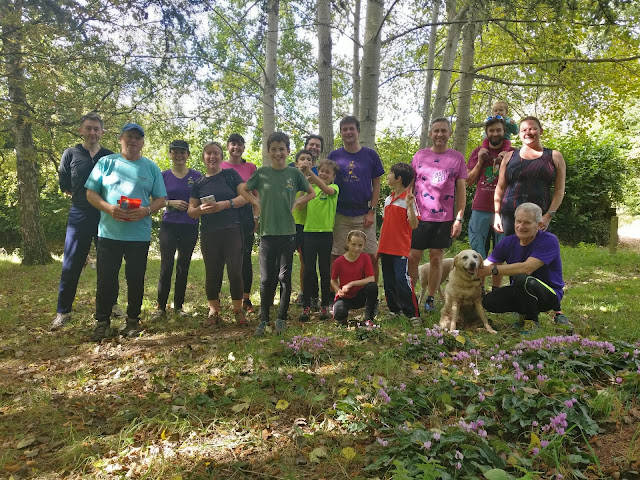