By Alastair Hibbins - October 01, 2017
There was a really good turnout for today’s trail.  Even those who had been celebrating Strappo’s 50th managed to come along.
Dobby had laid a three and on trail which was “quite short”* to take into account the delicate disposition of those who had been celebrating.  There were numerous long/short/walk splits and two fish-hooks, each requiring 6 to return to the hare.
The trail started by crossing the road and heading through some gorsey terrain.  There was plenty of shiggy too.  There was some confusion after the long and short trails re-joined with a spurious cross that no-one seemed to know what to do with.  We could hear the pack calling on ahead so decided to head towards the noise.  I’m not sure that was the right thing to do, but we soon picked up trail again and crossed a stream before heading into the woods.   The hare popped up to guide us across a road then the longs lost the trail again but the back runners managed to find the right way.
Anyway, eventually we got to a sweetie stop, shortly after Mouthful had fallen over.  (There were other fallers too, including Haribo and Splat – who managed a superb recovery and didn’t get fined for it!)
The longs headed up hill and the shorts down.  The longs found the fish hooks and caught the shorts up after reaching the summing and coming back down the other side.
The final long/short split took the longs through a swamp.  If you didn’t keep moving you would lose your shoes and find yourself thigh deep in shiggy.  After looping back onto the main path we headed through the model airfield and On-Home. 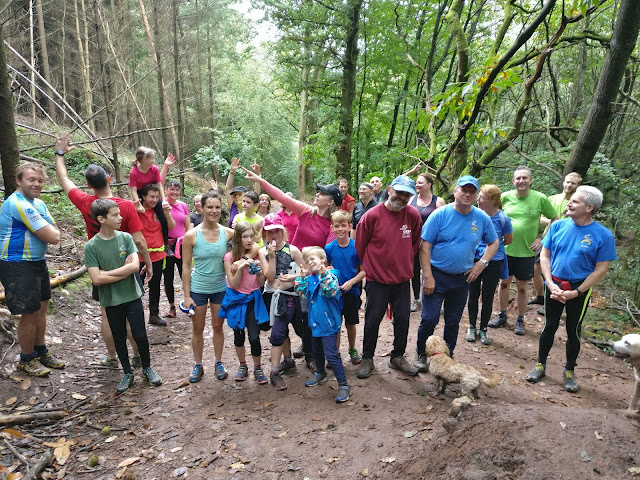