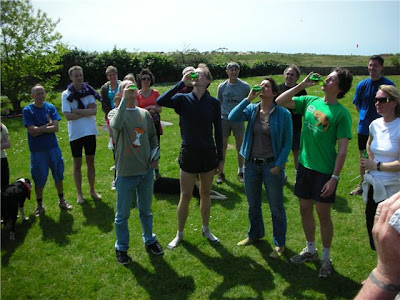 What a result from only up to 6 hashers per hash in 2001, today there were over 35+ for todays hash, great to know that now in 2009 City Of Exeter HHH is alive and still running (unlike some of the hashers!) Thanks for all of your support helping us to reach this historical moment.
Spockybitz was the hash hare and meister today how upon our arrival had noticed some strange behaviour by Radiohead which involved his running across straight into the toilet block running out again and disappearing again into the distance, most odd! He, Radiohead, did return armed to the arm-pits with various picnic objects.
Spockybitz informed us that there would be two hashes, a junior version of about 15 minutes for the wee hashers followed by the Full Monty. The Sherriff had his black book out within minutes fining amongst others Tampa and Isoceles for short cutting on a junior hash, whatever next ! Late arrivals giving various reasons for their delay greeted us upon our return from the junior hash. Off once more on the hash proper with the hare pointing and saying the on-on is over there as his arm swept through 180 degrees, out came the black book a note duly made by the sherriff, he stands no messing that man. Pavements were the order of the day, especially on the first short route. Miss Twin Peaks had the pleasure of finding the first fish hook, what she will do to be the centre of attention, as she ran towards the rest of the on-coming pack making her presence known. It was nice to see Woodpecker hashing once more with his new 6 then 6 technique. This he informed us involves six minutes of jogging followed by six minutes of walking.
Once at Littleham Church we had a sweet stop where Radiohead reminded us that was where he and Tuned-In did the deed. What deed did he do ! Upon leaving the sweet stop the hare announced there was other long/short split the long running within the church environs where Radiohead managed to frighten the parish folk leaving the church after the morning service, some scattered, some prayed but as luck would have it our hash hero didn't take any of them out, well so Stat-Nav later informed us all.Spockybitz, our hare laid on a posse of cattle to escort us across one field only to trap us for a moment near a stile, or was this the work of the sherriff, Oddbitz, only he knows, several hashers claimed that he had be seen in conversation with these beast. He was apparently one of the first to cross the stile when the cattle had moved, but he is a man of authority is our sherriff.
Once back at the starting point down downs were the order of the day followed by a BBQ and plenty of chat.Well done Spocky we all had a good day.
Next weeks hash Sunday 17 May is at Stowford Cross near Yettington at 11.00