By Alastair Hibbins - September 14, 2014
The hares thanked us for making the long journey down to Bovey.  But only 21 minutes from Exminster, so closer than Exmouth for the Stix family.  Free parking as well, in the centre of the town!  Then No Butt apologised for trail, because Mouthful had just become a Granddad, and they had been a bit busy during the lasy week.  It was a good sized back at the chalk-talk, swelled by families joining us from Haldon and Ashburton, and a few virgins were welcomed too.  Blobby was chosen as Sheriff because Twin Peaks has gone AWOL (apparently).

We set off across the road, with the walkers heading straight into Mill Marsh park.  Meanwhile the longs and shorts went up towards the town centre, and lots of beeping from oncoming traffic, and then off left by the school.  After a jaunt through the houses, we rejoined the walkers and followed the river, then underneath the main road.  There were a couple of long-shorts close together (Rocky was refusing to do the longs because he was moaning about his leg - he couldn't bend his knee - or so he said...) and then along the old railway line.  Then a regroup, while the kids decided to climb up a rather steep bank (including Rocky, whole leg had know magically got better!).

It soon became clear that our numbers had somewhat grown with late comers, including Hole-in-One, Number Two, and a new family who definitely seemed to enjoy themselves.  The trail continued up the side of the embankment and along a top (with lots of sudden drops to the left of the footpath).  The trail returned back onto the main path, swung round to the left, before we reached the Sweetie Stop by the edge of the River Bovey.  We had fudge, jelly babies and m&m's!  Tail Lamp brought his own Mars bar.

There was a Ha Ha for a long, while the shorts went straight to the river crossing (see below). I had to carry Rocky across on my shoulders, and Number 2 shrieked as the water level reached a critical height!

Then back onto the Park, and a few rounds of the outside gym, before returning the car park for crips, nuts and drinks.  Fines went to everyone who missed the river crossing, Tail Lamp for not sharing his chocolate (and for sitting down on the hash), and Number 2 for hysterics on the river crossing.
Probably the biggest pack of the year with 40 hashers, and then a dozen of us enjoyed a lunch in the Dolphin, especially Bollards (see below).

On On to Haldon Belvedere next week! 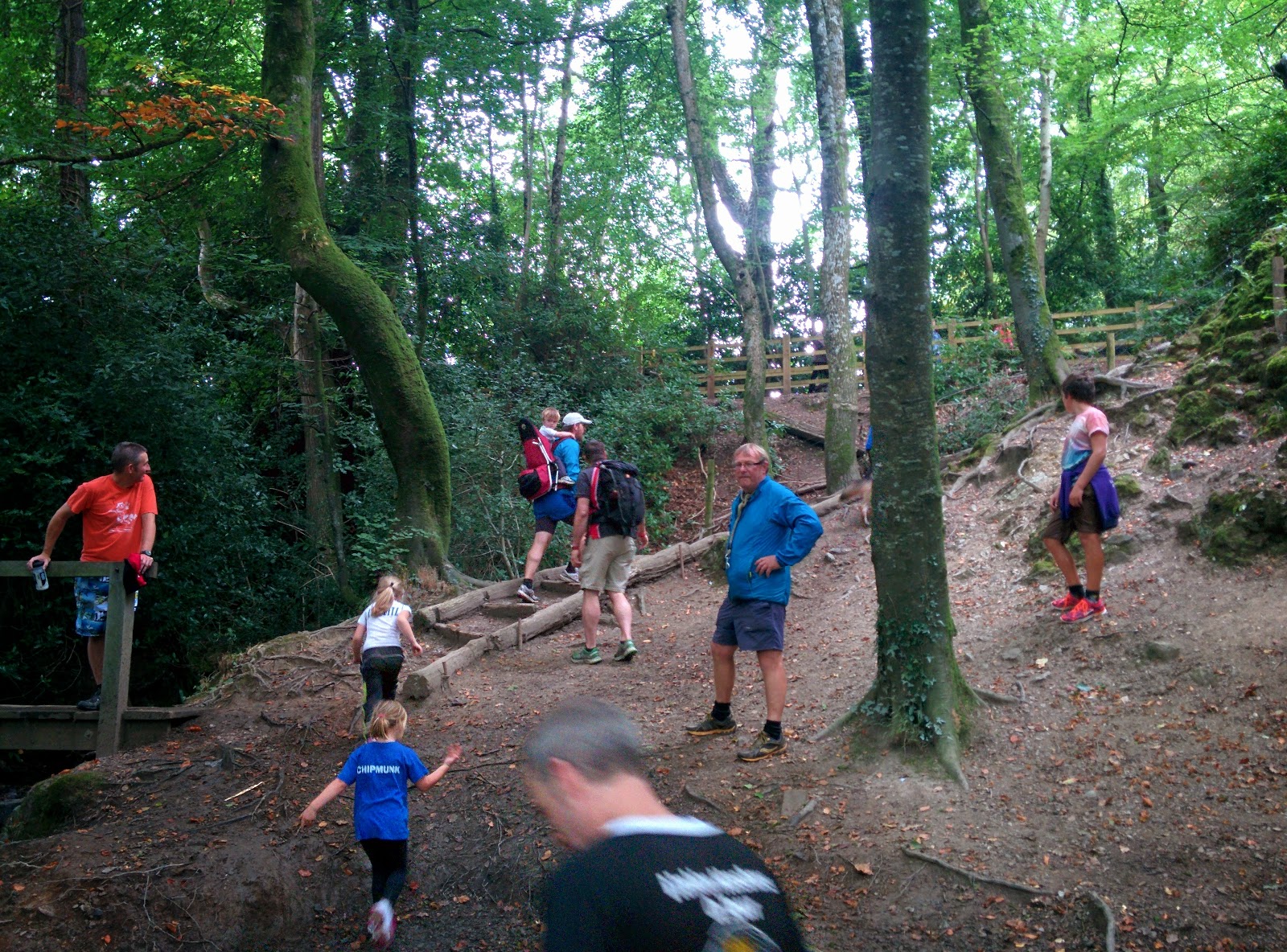