By Alastair Hibbins - May 17, 2015
The drama started before the opening circle with an accidental coming together of Chipmunk and Runner-bean, with Runner Bean coming off worst, with a bleeding nose.  Spocky advertised this year’s Autumn Gathering and the hares lied about the topography of the trail.

The trail left the layby in the Sidford direction, turning off the main road at the Bowd Inn.  Stix commented that it looked a nice pub – I agreed.  A left turn took us into some woods carpeted with bluebells.  We continued on for some time before starting the climb.  Once out of the woods and over the road, we entered a field with what looked like Donkeys in the distant top right hand corner.  The path alongside the field was steep and went on and on, eventually passing the animals which had been rightly identified as Donkeys before the altitude sickness kicked in.   The hill was relentless, but eventually we found ourselves at the peak where there was a sweety stop and a magnificent view.  We could even see the layby we had started at in the distance.
After refuelling, the trail took us back along some of the paths that we had used on the way up.  I was alongside No Butt who remarked to me what a nice pub the Bowd Inn looked.  Déjà vu for me.  Soon it was back onto the main road and On Home.
The closing circle took place at Strapo and Swampy’s House with a very professional BBQ.

Don't forget to RATE THE HASH.  Next week's trail is at the Obelisk near Mamhead (click here for map). 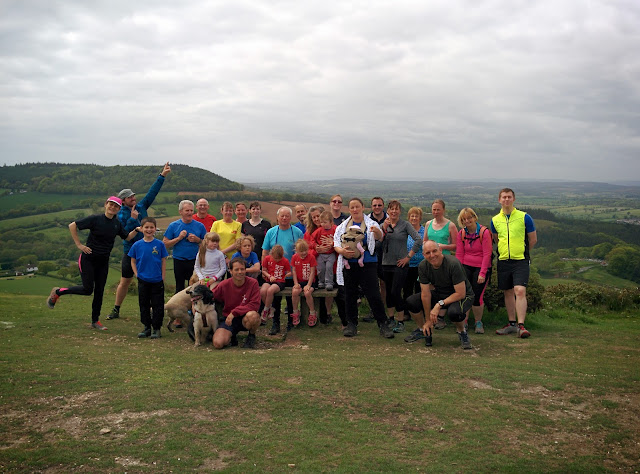