By Alastair Hibbins - September 20, 2015
It was a Stix-family lay, which normally means that Bollards and I get a map and plan the route the night before, and then one of us goes and lays firth thing in the morning.  We chose to lay from St Lukes becuase Rocky has swimming lessons at 9am.  Plus it was about time we had a city-hash, and there's no parking charges on a Sunday at St Lukes.  So I planned the route on the computer on Saturday evening, and then Bollards completely changed it!  But then I get my revenge because I'm the one was laying today (while Bollards stayed for Rocky's lesson), and  get to change it again!

It was always going to be a hash with a lot of checks, and even though it was a town run, we wanted to get some off-road in there.  So we decided to take it through Belle Isle park, and also through the Devon County Council grounds.

The first part of the trail went around the back of St Lukes, and back through the courtyard, before heading towards the Mount Radford, and then over to Bull Meadow Park.  This part of the trail was extremely twisty, and deliberately confusing.  The pack was missing the usual front runners and, with all those checks, the pace was slow.  The packed seemed to stay together well though (apart from Spocky, Itzy and Son, who stayed at the playground), Then down towards the quay along the river and up to the Sweetie Stop in the park.  The second half of the trail continued along the river bank, before reversing direction, and then heading up to the Council offices.  A large loop around the grounds, then along a muddy path parallel to the road, before a reasonably straight forward trail home.

By the way, notice how the trail looks a bit like the coastline of the British Isles!

We then went straight to the Mount Radford for a pint, chat and lunch.

The next hash is from Clyst Hydon Village Hall.  A map is here.   And please don't forget to Rate The Hash.  Finally click here to order your hash tshirts, hoodies etc before the order is placed in November. 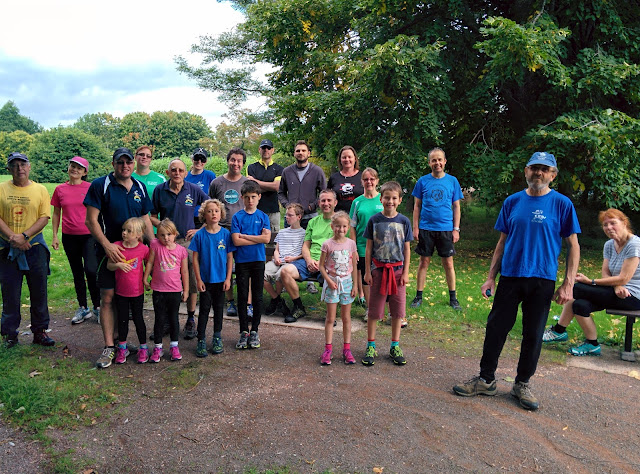