By Alastair Hibbins - March 06, 2016
It was a bit nippy, to say the least, as we circled up at Pinhoe Station Car Park. The Hares had laid a “2 and on” trail for us, with 2 long/short splits. Unfortunately, due to a very localised and heavy overnight shower, the marking of the first split had disappeared and it wasn’t until markings were spotted on the other side of the road, that the pack realised what had happened. We headed under the railway bridge and soon arrived at a Hash Halt near the Pinhoe Bretheren Church which seemed strangely desolate for a Sunday morning.

On we went along the lanes, before a backcheck took us into a field, where a number of the pack thought they were going one way, when in fact the trail went the other. Some of the trail had been marked in chick pea flour, and quite often the fish-hooks mysteriously disappeared. After exiting the field we turned right along a lane. A check at the junction lead us back into the same field, along the top edge.
The sweetie stop was at the “blue bridge” and there was a lovely variety of goodies. The trail continued over the M5 and onto a long/short split before coming back together as we headed back towards Pinhoe.

Please don't forget to RATE THE HASH - the votes will be counted and prizes awarded at the 2016 Christmas Party.
Next week's trail is from The Royal Oak, Exminster - at least for sane people (i.e., those not involved in the Grizzly): a map is here.  Good luck to the mad ones! 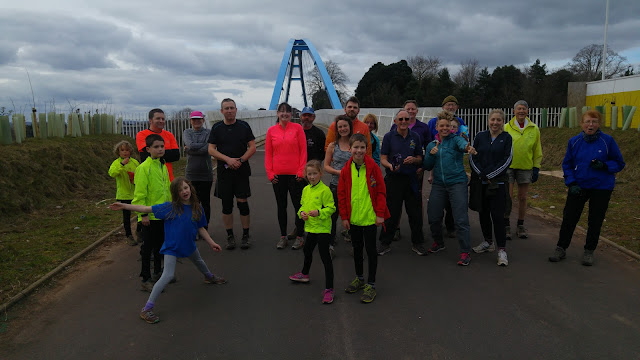