By Alastair Hibbins - December 11, 2016
There was some confusion about exactly where Frying Pans Car Park was.  On route, we found ourselves behind Bull Bait and family, so we thought we were onto a good thing and followed them off the main road to Budleigh.  As we drove down the lane, Bull Bait slowed down as we approached a potential car park turning, but we knew it wasn’t there, and so started gesticulating to them that they needed to go up the hill.  Unfortunately, we then realised that our mannerisms were akin to a Nazi salute.  Eventually, we both managed to miss the actual turning to the car park and I was dispatched up the entrance to check that it was indeed where we should be.  Others obviously had trouble too, as Mad Max, Haggis and Dobby and Woody all admitted to going elsewhere.

Woodpecker had laid the trail, assisted by Howling Wilf.  We took a winding route; not necessarily on main paths.   After two Long/Short splits, we arrived at the sweetie stop, minus Haggis and Swampy.  The trail continued along the road without them, but after another Long/Short split Swampy reappeared, having lost the trail after a check.

Fines were given to the latecomers, to hashers wearing socks on their hands and for various misdemeanours relating to fish-hooks.

Please don't forget to RATE THE HASH, and help decide who gets 'lay of the year'.

Also, bookings for the Xmas meal next week need to be taken by TUESDAY.  See here for more details, and how to pay and book online. Meet at Clyst St Mary Village Hall (map here) before going to the Cat & Fiddle for lunch.

Subs are also due in January - see here for more info (and pay online). 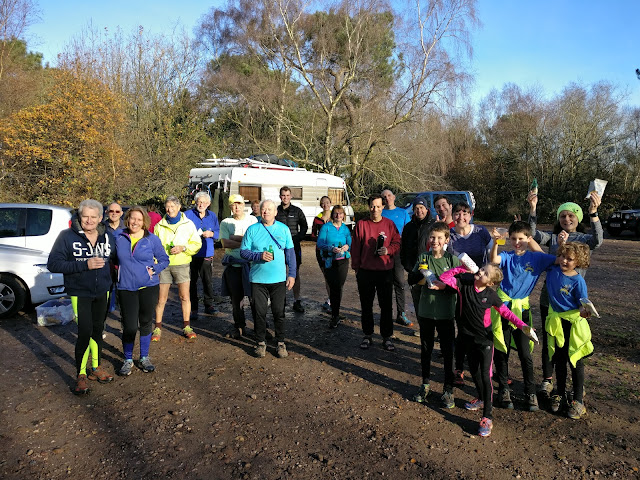