I've spent far too long editing the bl**dy photo below, so I'm not got to write many words! But today's trail was a r*n through the crowds of grockles. Starting from the car park, which is apparently known as 'inner' Dawlish Warren, the first hurdle was paying for parking.  Who knows their registration number - not Twin Peaks clearly!  Our hare was Wide Receiver who told us multiple times that there was a sweetie stop, and that it was 2 and on.

The trail took us up the path behind the 'outer' car park, along the cliff.  There was a skateboarder, who according to Speedy is one of the student leaders at Dawlish Community College.  Mouthful tried to jump on the back, and obviously frightened him because 2 minutes later he'd fallen off.  He seemed to spend far too long on the floor, but got up once Bollards tried to sound sympathetic.

Then a split that confused all the longs, before back across thee railway line on to the beach.  The sweetie stop was originally on the path by Red Rock, but there was an approaching steam train, so most of the pack climbed red rock to see the train from there.  When I say most of the pack, we were lacking Blob Hoblin, Woodpecker, Tampa, Coffin, Isosceles and Donald Trump - hence the photo shopping below.

Then back down on to the sea wall, invading a very crowded beach, a loop around the dunes (which the longs managed to get wrong), before heading back to the car park.

The fines were dealt out by Twin Peaks, including multiple awards to Woodpecker for being late, followed by him taking 25 minutes to pay for parking.  He arrived at the circle just as we were packing up! 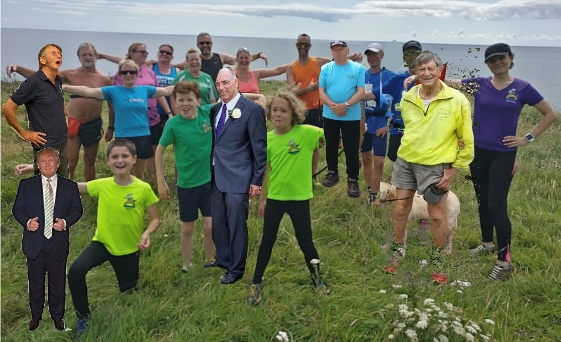