Showing posts from April, 2018
Show All 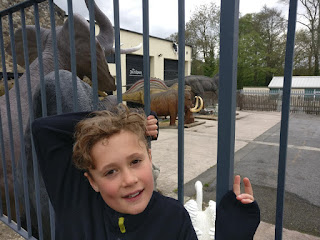 A great trail around Bovey, with some surprises.  We saw some zoo animals, and special 'baby' lambs, and a falling Blobby.  A lovely lady at the end started chatting up Wide, but she wasn't impressed when she found out we'd 'only' run 5 miles. ​ Don't forget to   Rate the Hash ! Next week: Kenton village hall (park on road) -   map here  - Stix and family. A table for 15 is booked for carvery after the hash at the Dolphin Inn - please let me know if you want a place by Wednesday
Post a comment
Keep reading 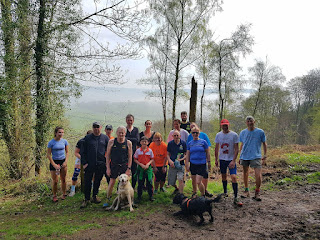 Photos from Hole in One Next week's trail is at Mutters Moor (Peak Hill), Sidmouth (SY109872): Strapo and Swampy - rearranged from the snow a few weeks ago (map). Don't forget to Rate the Hash! Next week: Hash from Station Road car park, Bovey Tracey (SX813781) ​
Post a comment
Keep reading
By Alastair Hibbins - April 23, 2018 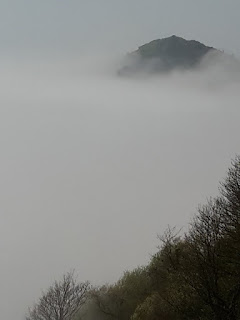 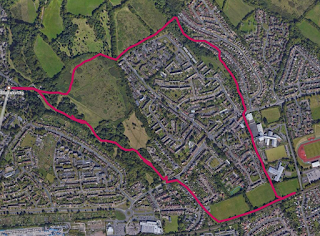 A different trail to what we are used to from Widecombe Way - while it started off in the valley park, we soon found ourselves down by the Arena and the railway line, before taking the return route up through Beacon Heath.  Just over 3 miles, but that wasn't a bad thing, given the rainy weather and the promise of tea cakes and tea to follow.   Which indeed there was, plus donuts and sweets (there was no sweetie stop on the trail - hence no hash flash!) and more. Fines went to the late comers (which included English Muffin and family, Woodpecker and Tampa), and for Childcatcher for slipping over and taking out Swampy with her.  I think I would have ended up with a fine as well, given what Speedy said about my under carriage - but he said it just as we were leaving! Next week's trail is at Mutters Moor (Peak Hill), Sidmouth (SY109872): Strapo and Swampy - rearranged from the snow a few weeks ago ( map ) .  Don't forget to Rate the Hash ! If you have any words, messages or pho
Post a comment
Keep reading

Hi all, We still need a hare for 27th May please. Urgent now! All dates also available in June, but May is needed for the diary. Thanks Stix Get Outlook for Android
Post a comment
Keep reading 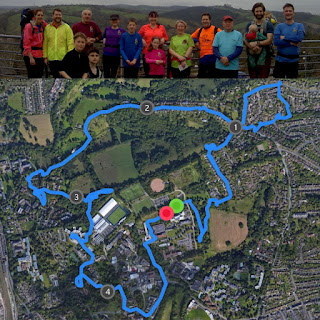 It proved difficult for some to find the correct car park; and those that did find it completely ignored the no entry sign – standard, really.  It was a select bunch with none of the normal front runners, as Boots was carrying two small children, one on his front and one on his back, so he could be forgiven for walking.  CC described renamed the long/short splits brutal/gentle.  I mostly checked wrong and caught most of the fish-hooks, thereby proving it was a slow pack.  The sweetie stop was near accommodation where the Gloucester Rugby fans were staying, ahead of the Chiefs v Gloucester match this afternoon.  A kind Gloucester supporter (dressed as a cowboy!?) offered to take the hash flash – as he didn’t realise that a large proportion of the pack were Chief’s supporters – until afterwards, but he took it in good spirits and we offered him a chocolate.  There were lots of steps in the second half of the trail and I clocked up 4.74 miles in total.  On On - Bollards
Post a comment
Keep reading

Can anyone lay on 27th May or 3rd June please?  Maybe think about BBQs or picnics ? On on Stix
Post a comment
Keep reading 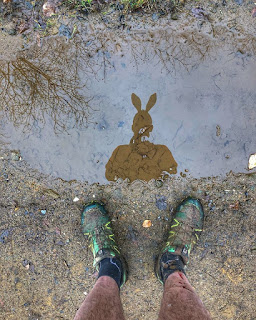 If you haven't already seen this - a few words from Wide Receiver below. If you have any words or photos, email them to hashwords[AT] cityofexeterh3.org.uk , and they'll automatically go to the blog, newsletter and facebook. Next week we are at the University of Exeter, Streatham Campus (i.e. the main campus) - Car Park A (find the Northcott Theatre and keep following the road, turning left at the roundabout) Don't forget to Rate the Hash ! And Hares required for 27th May and all of June Easter Hare! I set a tricky trail around Haldon forest for City of Exeter H3 this morning and then helped them get around. There were hidden eggs, some had mushrooms in them, some had leaves and some actually had chocolate. Well it is the 1st of April! The longs managed to clock up 5 miles around the ditches, trails and tracks in the forest. I don't think anyone eggscaped the mud. Hashers scrambled up the hills, over logs, through tunnels and up the stream bed. That'
Post a comment
Keep reading 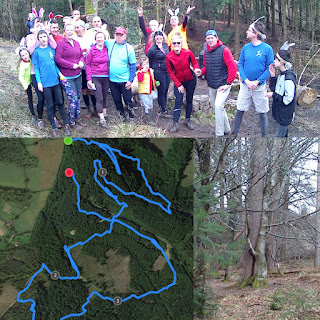