Showing posts from September, 2008
Show All 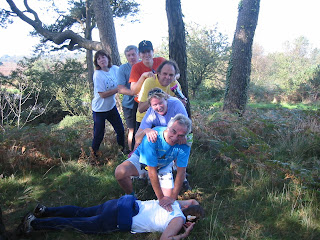 It was a beautiful and warm day as we hashers gathered in the car park, about 18 in all. The virgin hares stood looking nervous as we all drew up. Chesty managed to find her voice though and bellowed at us to 'CIRCLE UP!' We were given some hash instructions, the most prominent being that there were two water obstacles, if we avoided the 1st, we would be unceremoniously dunked in the 2nd! We set off wary of every sign of water. We ended up in the forest getting a little lost as the dew had disposed of quite a bit of flour. We came across a few fish hooks, which the usual suspects had to do. After about half an hour we arrived at a hash halt next to the car park? What's going on we all thought, we haven't had the sweetie stop yet??? It was there that Stat Nav admitted he'd made the rookie error of crossing the car park mid hash. I think everyone must've been feeling kind because I didn't hear anyone demanding a case of beer?! Through the car park and on a li
1 comment
Keep reading

By Tuned In and Radiohead - September 25, 2008
Don't forget, the virgin hares, Chesty and Stat Nav, are laying the hash this Sunday from The Warren CP, Woodbury Common.
Post a Comment
Keep reading

Seventeen goodly hashers arrived today on a glorious sunny day, we had one new hasher ,a mere 7 years old called Jazmine, yes spelt with a z according to Miss Twin Peaks. Woodpecker arrived at 11.10(bwt)British Woodpecker Time, only to be out done by Baglady who decided to pass the meeting place and take in the sea air at Teignmouth. I didn't notice any increase in her performance having taken some of this intoxicing Teignmouth air, any she was fined by the acting Sheriff, one Spockybitz. We were also graced by the appearance of Rambo who took a good five minutes before exposing his upper body features. All went very very well today until we heard a scream deep in the wood, the scream came from the tonsils of Spockybitz who has a thing about spiders, hence the scream. He was very brave and offered to protect everybody from the back of the pack. Fruitybitz and X-bitz managed to do a fish hook, bearing in mind they were walkers, what does that say for the rest. The sweet stop droppe
Post a Comment
Keep reading

Well Tail Lamp and Groucho arrived first at around 10.40 and noticed the hare travelling by on four occasions, was he lost? Was he just confused? Or was he laying the trail? He pretended not to notice us for he did not attempt a sideways glance as he sped here there and.............. . The weather was great today no wind or rain just sunshine. Due to this extra warmth many of the gathered throng, some 19 in number, just lurking around at each check whilst the usual human dynamos did the checking. Even the Sheriff milked the situation claiming he was limp, what can one say?!!! The trail was well laid, lots of checks, we had water hazards, Groucho kept his distance this time making sure that Tampa was at the very least an arms length away. The River Otter was quite refreshing today, talking of which the hare produced a cool bag full of iced lollies at the sweet stop.The hare has certainly raised the bar as far as sweet stops are concerned. All in all a good hash, well done Mr Hare. Gro
1 comment
Keep reading 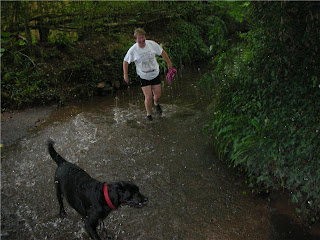 The day started off with much better weather than we have seen of late and by the time we had all (eventually) gathered in Lympstone Village CP, the sun was even threatening to show its face. It was a great turnout with well over 20 hashers including a lot of children. Visitors also from Bridgwater H3, Ferret and Bangkok as well as our resident guests (is that an oxymoron) Sorepoint and Paperwork. Notable by his absence AGAIN was our sheriff, Odd Bitz, come back, there's going to be a hate campaign if I keep handing out many more fines! We set off towards the estuary, up the hill and down again, with Groucho commenting to someone that he hadn't checked the tide tables while laying the trail! So much for a dot within 50m Groucho. After the back check up the road I knew it had to be along the estuary so I persisted and after about 200m I called the on on. This called for a few precarious manouveres along the bank to avoid any drowning incidents. I'm sure you ought to have
1 comment
Keep reading