Showing posts from October, 2010
Show All

By Tuned In and Radiohead - October 28, 2010
Well this was indeed Brains birthday hash and what a fan base of hashers she appears to have. The rumour mill informs me it was over fifty, whats going on ! Anyway Brains other half, the one and only Tampa, laid the trail or was it a trial before us eager hashers. However our hare then realised that the size of todays pack out stripped the supply of sweets at the "sweetie stop", so as if by magic Brains was sent off to increase supplies. We were off to a great start with a long/ short split the shorts seeing the longs within minutes, only difference being that at least ten hashers took a non trail short cut known as a short short I believe. They crossed a main road and not via a footbridge but our trusty sheriff had them in his sights, they were of course fined. We then thread our way through Clyst St Mary towards open countryside, where upon hashers were actively encouraged to get their leg over, in this case over a wall to gain access on to a footpath. There a large number
Post a comment
Keep reading 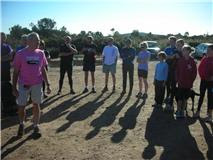 Well it was 11o'clock and the hashers were ready to circle up. But where was the hare? Radiohead - the original hare was in London - hare duties hand been handed over to Stat Nav. But where was he? In the nick of time he appeared. Apparently, he had got lost on his own hash....why do they call him Stat Nav? Anyway, circle over it was On On to the first check. A little bit of confusion later, well cunning back check, and it was On On through the woods. Soon the hash came upon the first long - short split. The longs went racing off but the majority of people decided to undertake the shorts. The hare followed the shorts but went back to ensure the longs were on trail..."who's behind Spocky?" asked the hare. Dr Jeckyl and Woodpecker he replied. So the hare went back...and found Woodpecker...but where was Dr Jeckyl? "Don't worry about me" said Woodpecker. So Stat-nav ran on. On until he caught up with everyone else. Luckily, the carefully placed re-group bro
Post a comment
Keep reading 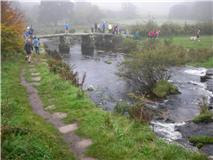 After the fun and frolics of the hash weekend, those of us from Pixies Holt set off to the hash venue where we met up with the others that had come for the day. In true hash fashion things started off in a confusing manner as cars were all coming back out of the original car park as it was pay and display and reconvening just inside Bellever Park. Unfortunately Chip Shop hadn't been blessed with the weather and it was very foggy. We circled up and set off down towards the river where we promptly all got totally lost and confused eventually finding the on on back up the hill. Those silly FRB's got caught up with the first fish hook of the day and had to come back down the hill again. At the top we had a regroup then set off again down to the scene of our first ever hash weekend. Shortly after this the hare was heard to whisper, "I won't be very popular in a minute", as we all headed up a very steep hill. 3 fish hooks later we reached the top!!! The view, had it
Post a comment
Keep reading 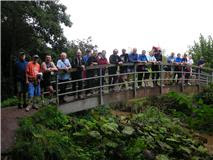 Salmon Pool Lane was the venue and no fewer than 20+ turned out even though the weather several hours earlier was very wet and wild. As luck would have it our hares, Blobhoblin and Tail Lamp, had influence with the weather and it didn't rain for the whole of the hash. When we finally got under way confusion reigned as the pack reminded me of a block of butter, well spread. Eventually the hares had had enough of the chaos that they were witness to and guided us all on the straight and narrow for about 50 metres. A long short split soon appeared the longs almost running around the perimeter of a football pitch. With the pack back together things were straight forward for about two minutes, when we noticed that two of the pack had suddenly disappeared, then rustling was heard coming from some bushes and out emerged Sore Point. Sore Point then gave us a story of food in Tunisia from where she had just returned, work out the rest. Next we came to a golf course where again the pack w
Post a comment
Keep reading
More posts