Showing posts from February, 2009
Show All

By Tuned In and Radiohead - February 27, 2009
Thirty eager hashers gathered in a circle awaiting the arrival of our hare, one Spockybitz. He then expained the trail etc before landing a bombshell upon us, it was one and on. Well we know about the banking crisis, but a flour crisis is a shortage of the white stuff. Perhaps not for he, Spocky then drew a rather lovely large circle in the middle of the car park and echoed those famous hash words, check it out. Well there were hashers going in all directions looking for the first blob, it seemed like forever until a lone hasher put us all out of our misery. However more hash misery was to follow within five minutes as we found our first back-check. This time the hare made it a little easier to find the trail actively encouraging us to go forth, go forth into thick gorse. No time for a risk assessment.For those of us wearing shorts this was no short cut, only plenty of short cuts on the legs, with little care for us injured hashers being shown by the hare. Soon after the gorse we cross
Post a comment
Keep reading 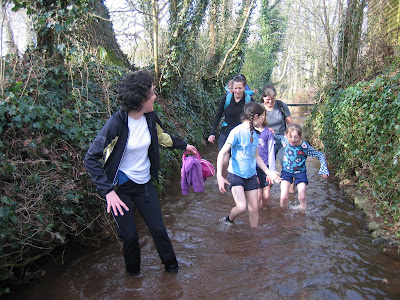 Love was the theme for todays hash with no fewer than thirty-five love struck hashers hoping that something or some one would cause their hearts to flutter. The hares Fruity-Bitz and Odd-Bitz informed that all checks today were heart shaped and that any hasher confronted by a back arrow would have to run back to the hare and plant a kiss on their personage to which the pack murmured with one or to ah's. Kissing at all the kissing gates was actively encouraged, but only with the hasher behind you. It was indeed a lovely day as we set out looking for love, with a spring in our steps the pace of our heartbeats was overwhelming. Rumour has it that Tail Lamp was inviting female hashers to feel his pulse. Several hashers were indeed jockeying for position as we approached the first kissing gate with Ex-Bitz hanging back before making her move. Everyone tried to keep well away from Tampa while Blobhoblin appeared to go weak at the knees after the kissing gate - perhaps he wanted t
Post a comment
Keep reading 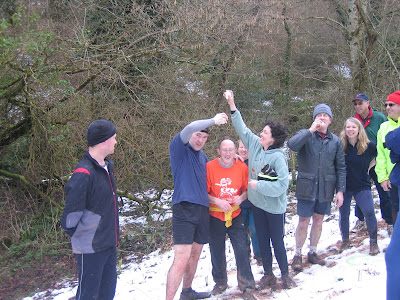 Twas a very brrrrrrrrrrrr morning as hashers,18 in all arrived at the venue,just like penguins we huddled around in a close hash circle for warmth. One hasher however, Miss X-bitz went for bear hugs from any male hashers who had been abandoned from the circle,What can we say ! Next our two hares appeared, Twin Peaks and Blobhoblin, and it was noticed that Miss Peaks had a radiating smile on her face whilst Blobhoblin was a whiter shade of pale. One hasher could be heard to utter "look at the state of them, where have they been and what did they do"? Anyway, the hares give out the usual instructions along with a new sign, an Ahh stop -more later. We set off from the car park only to face the hazards of Shag-Pile and Swooner arriving, late of course. In true hash style we carried on leaving them to catch up which didn't take long. Within five minutes we encountered mud, glorious mud followed by water. How thoughtful to return to having clean trainers even if it
Post a comment
Keep reading 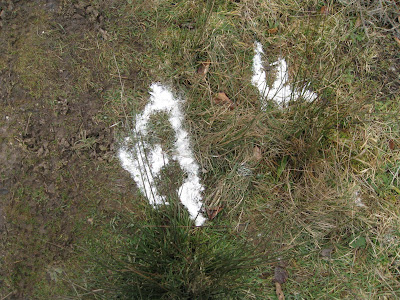 A record turnout today despite the bitterly cold wind, 34 hashers in total as well as our 4 legged friends. No time was wasted at the hash circle as Howling Wilf gave us the run down, which included 'no fish hooks because I disagree with them'!!! Oh really????? Today, he had been ably assisted by Slipshod, a virgin hare. Off we set en masse over the road. With all the rain of late it was a bit boggy underfoot. We quickly arrived at the first long /short split, with the longs running down a long track, loop round and back up another long track, well you can't complain you hadn't warmed up. Along the track led us to an arrow where we had to negotiate a steep bank that climbed up and up and up for a fair old while. Lucky our lord and master Groucho wasn't here today, he'd definitely have gone arse upwards! As it was, Chesty took up this mantle today and despite warning from Stat Nav of 'mind the branch', slipped forward and ended up on the ground! On to a
Post a comment
Keep reading
More posts