Showing posts from September, 2014
Show All

Bridge Farm just outside Stoke Canon was the venue for Groucho and Farmer Jon (aka "here he is") birthday bash.  It all started at 5pm with a hash laid by Groucho and Blobby, which first headed towards the village (via a loop for the longs).  Only Rocky and I did the "wet" short (everyone else either choosing the long or the road bridge), through a shallow stream, and then across the river.  The longs, a little while back at this stage, managed to take themselves off-trail and through an arch beneath the road, where the slurry was rather deep.  But at least they had the river to wash themselves off.   The the trail headed towards the railway line behind the village, and back to the road for the sweetie stop, where Rebecca (later named - see below) showed the kids how to eat nettles without getting stung!  The shorts headed straight across the road, and a pile of bollards was too much of a temptation for me, and I blocked the trail with 8 red cones.  Sadly, the longs
Post a comment
Keep reading

There were two things I expected from today’s hash:  1.  We would struggle to park at Haldon Belvedere Car Park and 2.  The marks wouldn’t be very big as Blobhoblin is well known for being economical with flour.  I was right on both counts.  The gate into the woods from the car park was open when we arrived and those preceding us had had strict instructions from a Ranger to leave enough clearance for an ambulance, so we all triple parked blocking each other in.  The usual introductions took place in the circle:  There was a well- travelled visitor who most lately had hashed in the South East and Spocky and X-Bitz had bought a virgin family along.  The trail set off up the road and turned right into the woods.  Cousteau disappeared into the trees but we couldn’t hear him calling because Lark’s dog was making too much noise.  Following a regroup we climbed in and out of undergrowth, passed through tunnels and wandered up streams for quite some time before eventually arriving at the S
Post a comment
Keep reading 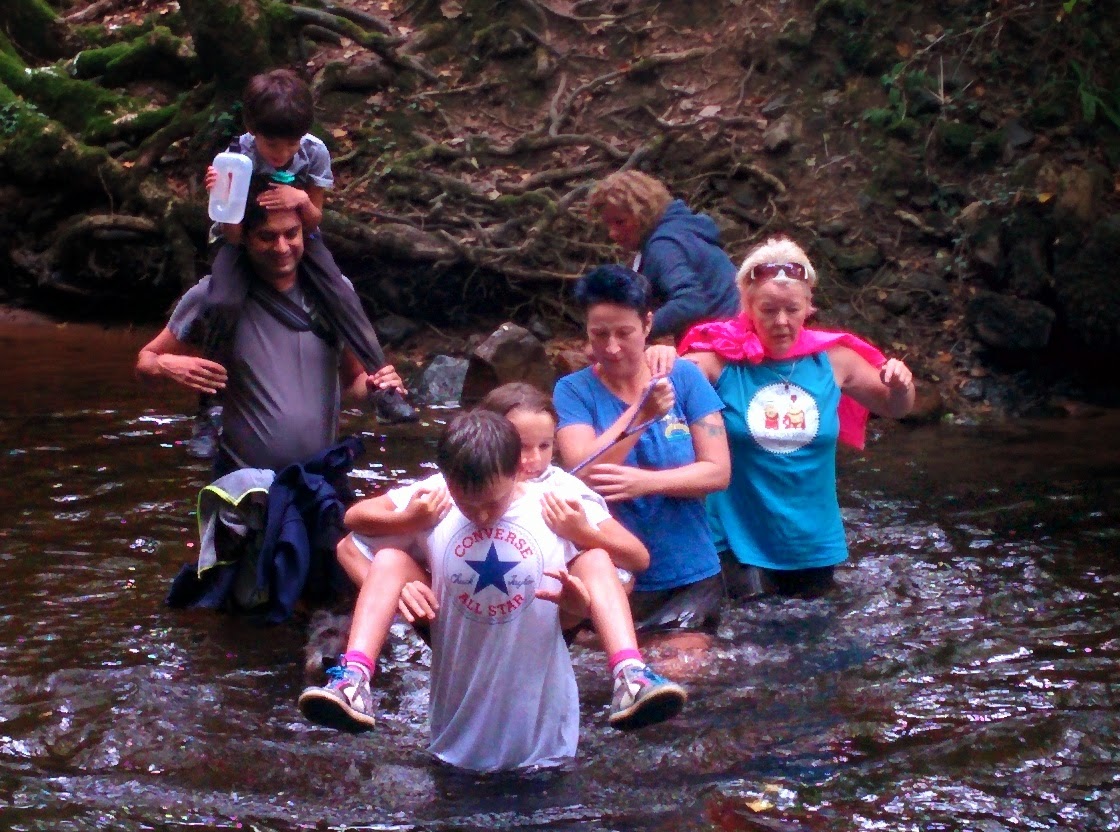 The hares thanked us for making the long journey down to Bovey.  But only 21 minutes from Exminster, so closer than Exmouth for the Stix family.  Free parking as well, in the centre of the town!  Then No Butt apologised for trail, because Mouthful had just become a Granddad, and they had been a bit busy during the lasy week.  It was a good sized back at the chalk-talk, swelled by families joining us from Haldon and Ashburton, and a few virgins were welcomed too.  Blobby was chosen as Sheriff because Twin Peaks has gone AWOL (apparently). We set off across the road, with the walkers heading straight into Mill Marsh park.  Meanwhile the longs and shorts went up towards the town centre, and lots of beeping from oncoming traffic, and then off left by the school.  After a jaunt through the houses, we rejoined the walkers and followed the river, then underneath the main road.  There were a couple of long-shorts close together (Rocky was refusing to do the longs because he was moaning about
Post a comment
Keep reading 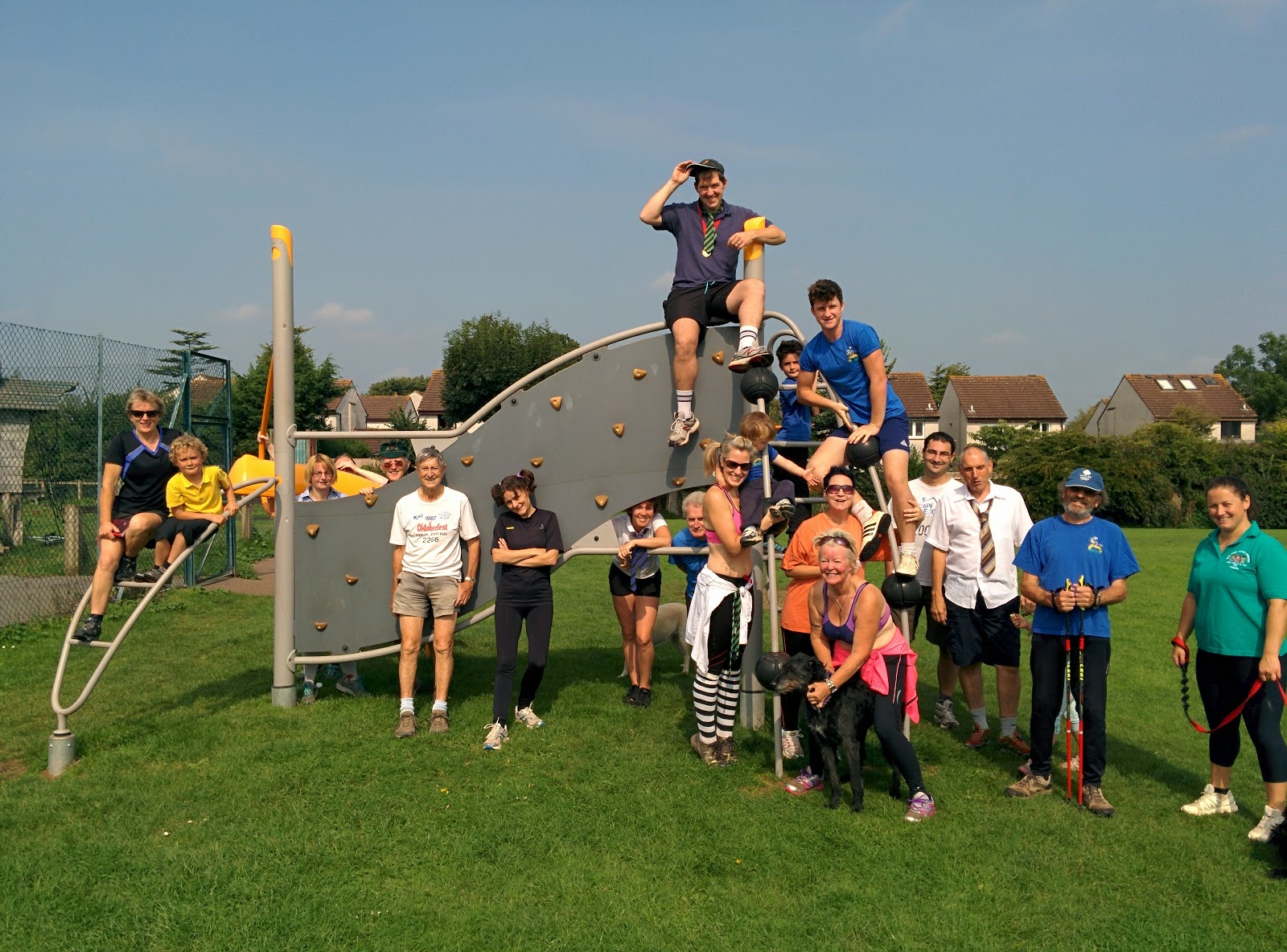 (Mainly) written by Speedy this week! A bak2skool hash from our resident teacher, Hole-in-One. Many arrived in fancy dress. Blobby had a school cap, Stix wore a shirt and tie, Spocky had a tie too, and Bollards had her Perfect Prefect badge. Rocky came in his real school uniform! But is was a great hash, despite hole-in-one being ill recently (she forgot her sick note). There was some interesting views along the trail - and lots of rhubarb in a field.   At the start of the hash we went on to a narrow road for a while. After that we came to a long sort split. Bollards went the wrong way and then it took her ages to get back. Next we came to a regroup and went down a road a few minutes later Rocky started to whinge - I don’t know how Stix deals with it! Shortly we were at the sweet stop and there were lots of sweets! After the sweet stop we went past some houses and then we saw the on-home. 5 minutes later we were back and rocky drunk some juice in about 5 seconds! Next it was the fine
Post a comment
Keep reading
More posts