Showing posts from January, 2009
Show All

By Tuned In and Radiohead - January 26, 2009
A chilly morning up on the common greeted the 20+ hashers that gathered. We were immediately hit with some tragic news and that was the fact that the hare had left the sweets on his kitchen table! However at todays hash we welcomed back Itsy Bitz (and mommy) who we haven't seen for a little while. The hare called us onto check on the far side of the car park and then drove off to the garage to buy more sweets! It was a sneaky ploy to put the check on the far side of the car park as we eventually found the trail back over the other side! Confused....we were! On On down the hill only to find at the next check that Chad, Howling Wilf and Stat Nav had run through a back check so we weren't onto check at all! This was only pointed out to us by Spocky Bitz who was walking while carrying Itsy Bitz so on back we went to try and find the trail again. Up the hill we went only for Odd Bitz to turn around and come back toward us, but he kept telling us to keep coming! We then came across a
Post a comment
Keep reading

Another fine turnout for todays hash in some lesser hashed territory, 27 hashers I think! We even had a hash virgin or two! We received instructions from Blobhoblin who thanked Groucho for assisting him, otherwise we wouldn't have finished til next Sunday and he would still be out laying it. Were we in for 'extreme hashing' today??? We set off out of the car park onto a check and Spocky and Stat Nav checked uphill while Slipshod checked downhill. On down hill it was and we were off to a flying start....almost quite literally for Carol and Tuned In with the 2 Millies pulling hard! Onto another check where Isosceles shot off on what we eventually found out was the correct trail. This found us our first fish hook of the day, where Beth, Finn and Spocky got caught out, one of Spockys first....he ended up doing all of them.....nutter! We emerged out onto a country lane where we ran down around the lane until we came to a hash halt. It was here Fruity Bitz decided to 'powder
Post a comment
Keep reading 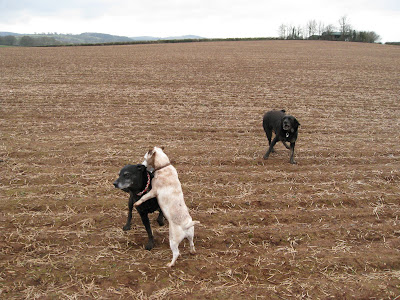 It was windy and rather chilly in Upton Pyne Village CP this morning but a fair number of hashers still braved it. Spocky Bitz enjoyed taking peoples money in his new position as treasurer, with his very efficient looking folder. We set off out of the car park down the hill shortly reaching the first check then quickly to the next one where the loitering began. Eventually we were called on and the pack spread out as we set off through the village. We spread out in the field trying to find the trail, but only succeeded in finding some raw sewage, helpfully pointed out by Chad....nice! On finding the trail again we set off shortly coming to the first regroup where we then set off on the long/ short split. The long taking in a big loop around the country lane before coming back through another field, meeting up with the shorts again in the next field. On to another regroup where we headed off into a pig field! The dogs seemed to enjoy this more than the humans, all those lovely smells to
Post a comment
Keep reading 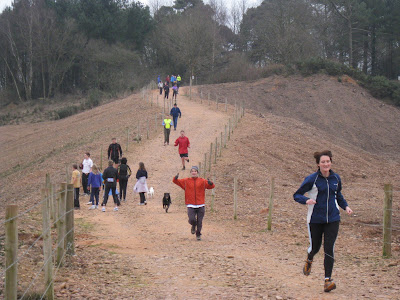 Todays hash was a record turnout with 32 hashers arriving! The whole hash set off with the front runners calling on on only to be called back by the hare as apparently they had found a later part of the trail! On finding the correct trail we let the front runners check it out and headed off up the track. Only to have a lot of lingering at the next check where we had a bit of trouble finding the trail, it wouldn't be the first time today! We seemed to be going round in circles! Further down this track was the first of many fish hooks of the day. This was where the Tuned In got fined for innocently stopping to take photographs, thus avoiding the fish hook. From here the trail went round in what felt like more circles. On On we were called, with Radiohead coming back from yet another fish hook, but he didn't run up past us again, he was lingering??? Now why would that be? Back check was soon called and we picked up the trail down the steep path. 3 fish hooks later we all arrived
Post a comment
Keep reading
More posts